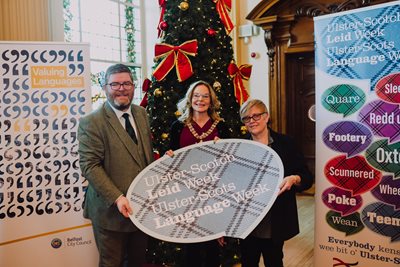 The event was organised by community development organisation, Small Steps, with support from the Ulster-Scots Agency and in partnership with Belfast City Council.

Among those taking part in the Muckle Ulster-Scotch Leid Week/Big Ulster-Scots Language Day celebration were the Alastair Scott Ceilidh Band and storytelling and poetry recitals from Anne Blair.

Speaking at the event, Lord Mayor Councillor Tina Black, said: “We are delighted to be hosting this event in City Hall in partnership with Small Steps.

“Belfast has a strong historical connection to the Scots heritage and it is important as a council we celebrate the language, culture and heritage of Ulster-Scots.

“We are committed to promoting and celebrating diversity and our language strategy launched in 2018, recognises in a real and meaningful way the cultural significance of language to communities and that languages be used and nurtured for present and future generations. We look forward to supporting many more Ulster-Scots initiatives.”

Ulster-Scots Agency Chief Executive, Ian Crozier said, “Just a few weeks ago, we learned that over 190,000 people now recognise that they have some Ulster-Scots, but that’s just the tip of the iceberg.  Virtually everyone in Northern Ireland has Ulster-Scots and we want people from all communities to recognise that fact and embrace it.

“We are delighted to support Small Steps in delivering this event in partnership with Belfast City Council as part of Ulster-Scots Language Week 2022.  Ulster-Scots has been an integral part of life here for centuries, for people of all classes and creeds and our programme reflects this.”

For more information on the council’s Language Strategy, visit the council website at https://www.belfastcity.gov.uk/language