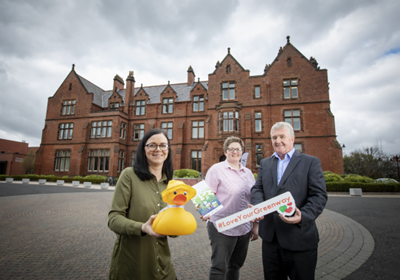 Results from a study evaluating the economic, environmental, health and social impacts of the Connswater Community Greenway were recently announced at an event held at Riddel Hall.

Results from a study evaluating the economic, environmental, health and social impacts of the Connswater Community Greenway were announced recently at an event held at Riddel Hall.

The Physical Activity and Rejuvenation of the Connswater (PARC) Study was an 8 year research project conducted by Queen’s University Belfast and funded by the National Prevention Research Initiative and Medical Research Council in partnership with EastSide Partnership and Connswater Community Greenway Trust.

The event, which included representatives from community, voluntary and statutory agencies from across Northern Ireland and UK, was also an opportunity to acknowledge the success of the Connswater Community Greenway project to date, address areas of development, explore legacy, sustainability and benefits of greenways.

Thanks to a £40 million investment, the Connswater Community Greenway has created a safer, cleaner, greener public space and 9km linear park, connecting people and places along the course of the Connswater, Knock and Loop rivers in east Belfast.

An £11 million flood alleviation scheme incorporated into the project has helped to reduce flooding to 1700 properties. The project was developed by EastSide Partnership and delivered in conjunction with Belfast City Council with investment from The National Lottery Community Fund and The Northern Ireland Executive.

Key successes and findings from the PARC study include:

o 2-fold increase in the number of people using the Greenway and double the number of visitors, from 6 to 13%, from people living outside the local catchment area.

o A very positive and encouraging improvement to the Connswater River system.

o 1700 properties protected from flooding along the Connswater Community Greenway.

o No significant improvements in the health and wellbeing of residents have yet been observed but impacts of complex interventions are likely to take years to mature. The report acknowledges that the analysis to date has been carried out while the Greenway is still in its infancy.

o Based on future improvements, the Greenway will have a significant economic benefit to the local area. Economic modelling studies show that if 2% of local residents become more active the Greenway will in essence pay for itself due to reductions in the incidence of chronic illnesses such as cancer, diabetes and cardiovascular disease.

o Other projections demonstrate that that for every £1 invested in the development of the Greenway there will be a £4 return based on increase in a number of factors such as tourism, employment and housing prices.

o It is a model example of a complex multi partner project undertaken with key community, statutory and non-statutory agencies and researchers in QUB, a model for community planning.
Lord Mayor, Councillor Deirdre Hargey, said:

“The success of the Connswater Community Greenway in improving the environment and boosting the health of local people as well as the economic and tourism benefits it has brought to Belfast is encouraging for the Council to support more Greenways across the city. These benefits are also aligned with the aims and values of the Belfast Agenda – the city’s long term development plan – so it is exciting to have a report like today’s showing concrete results which can be sued to help shape future plans.”

“On behalf of EastSide Partnership and the team at Connswater Community Greenway, we are delighted to share the key findings of the PARC study. Whilst we acknowledge and celebrate the positive and successful impact the Greenway has made to date locally, nationally and internationally, the study reminds us that our work is only just beginning especially as we strive to deliver and make important impacts on the lives of local residents. We are confident that with our drive, commitment and established partnerships the Greenway will continue to deliver in the years ahead. We are excited to build on the success of the project and help to influence government to invest in the development of future Greenways for the benefit of local communities.”

“There is no doubt that the PARC research reveals how significant the Connswater Community Greenway has been to both local east Belfast residents and to the city of Belfast. It has been an important project that has not only made a major impact in the community but has a number of positive key findings. Our research project is one of few to comprehensively evaluate the public health impact of the development of a new Greenway. Although, at this stage, we have not found evidence of improvements in the health and wellbeing of local residents to date, it is important to note that for infrastructure like this that will last a generation, we are in very early stages in the evaluation of the potential impact of the Connswater Community Greenway.”