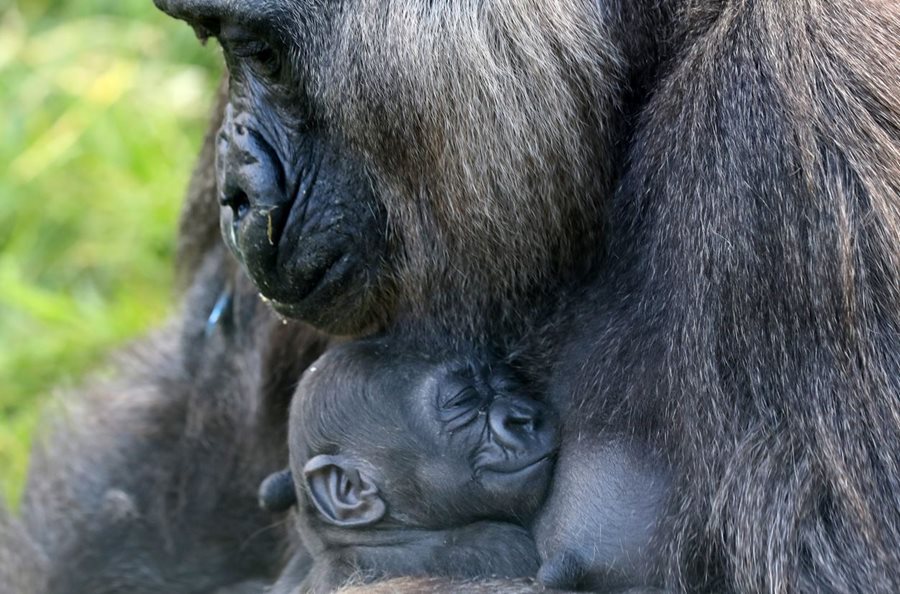 Arriving in the early hours of Friday 8 October, the Western lowland gorilla, was born to mother Kamili and father Gugas.

The baby gorilla remains without a name until its sex can be determined. Newborn gorillas cling to their mother’s stomach for the first few months and so it will be a while before the gender can be determined.

Mother Kamili gave birth naturally to the infant, with father Gugas and the rest of the family troop close by.

Zoo Curator, Julie Mansell said, “ Mother and baby are doing very well and our zookeepers are giving them essential time to bond. The infant looks strong and healthy and Kamili is an experienced and excellent mother. We will continue to keep a close eye on them both but everything is looking very positive.”

This is the second infant that Gugas and Kamili have had together. Back in 2014 the couple welcomed ‘Kibibi’ which means ‘little lady’ in Swahili.

The western lowland gorilla is classed as critically endangered by the International Union for Conservation of Nature (IUCN), with the total population estimated to be less than 100,000. This great ape species is a quiet, peaceful animal and spend most of their days eating and sleeping. These gorillas come from dense forests of western central Africa and are herbivores whose diet include fruit, shoots, bulbs, tree bark and leaves.

Julie Mansell explained, “This birth is fantastic news for Belfast Zoo, as we are part of an internationally important breeding and conservation programme which is designed to help safeguard the future of western lowland gorillas. Gorillas are facing the real and severe risk of extinction in their native habitat due to habitat loss as well as the pet trade. Adults are also killed for bushmeat and trophy hunting.”

Father, Gugas, is Belfast Zoo’s silverback gorilla.  He was born in the wild but had a tragic start to life as his parents were both killed, most likely for smuggling. As a young, sick, orphaned gorilla, he was acquired by Lisbon Zoo from a Portuguese circus.  Later he was transferred to Stuttgart Zoo in Germany to live in a nursery group for orphaned gorillas.

In 1998, Gugas arrived in Belfast Zoo and is genetically very important to the European breeding programme. He is only represented by his offspring in the zoo population. Gugas’ initial fertility tests were not promising due to his unfortunate early years, however he has defied the odds to father four infants at Belfast Zoo.

Visitors have a chance to see the newest arrival in the zoo’s gorilla house. The zoo is open every day 10am – 4pm with last admission at 2.30pm.