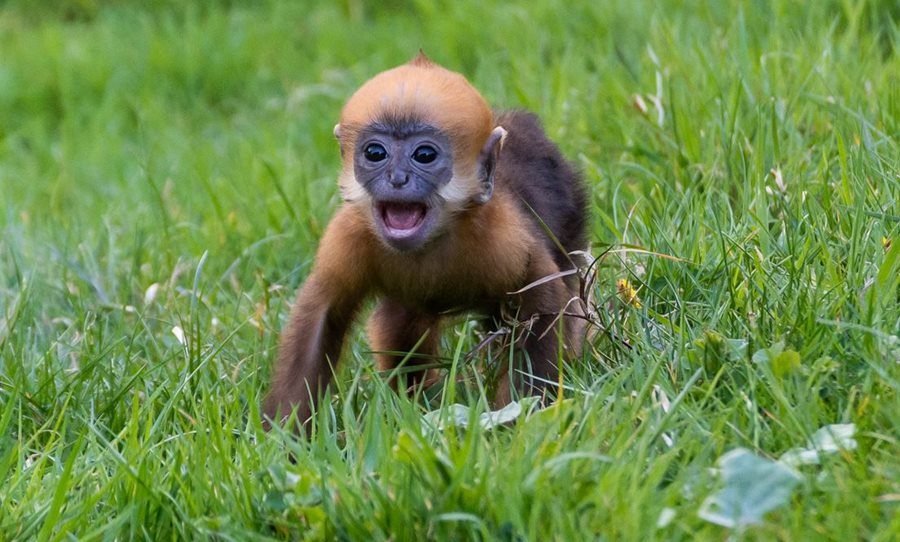 We are happy to announce the recent births of two Francois' langur monkeys. The infants were born within weeks of each other at our Cave Hill site.

The first newborn arrived on Wednesday 2 March to mother Chua with the second one arriving on Monday 18 April to mother Nicolene. Male AJ is the father to both infants.

The brightly coloured infants join big sister Hongxin, also affectionately known as “wee red”, who was born last May. Hongxin was hand-raised by a zookeeper last year and has now been fully reintroduced back into the family unit.

Zoo Manager, Andrew Hope, is the studbook keeper for the François’ langur breeding programme. He is responsible for co-ordinating the genetic and reproductive management of this captive population, which are currently living in nine zoos across Europe.

Andrew Hope commented, "The arrival of three Francois langurs over the past year is fantastic news. It is always a great cause for celebration when a langur is born as there is reason to believe their population has declined as much as 50 percent in the past three generations.

With an estimated population of less than 2000 left in the wild, this species is in trouble. The biggest threats are poaching and habitat loss.”

The zoo has celebrated the birth of this rare species many times before and has been incredibly successful at breeding this endangered primate with over 20 infants born since it become home to them in 1994.

Genetically diverse captive populations are therefore extremely significant for the potential long-term survival of this species in the wild.”

Francois langurs have black fur with white streaks of hair running from their mouths to their ears. They also have a tuft of hair on top of their head. However, infants are born with orange fur which gradually changes to adult colouration as they mature.